Virtual pilots take to the skies, to take part in the most poignant battles of the Pacific Theater in this World War II combat flight sim. The game offers an involved campaign designed to re-create the battles at Pearl Harbor, Wake Island, Midway, Coral Sea, and others. 'Instant Action,' 'Single Mission,' 'Training,' and 'Multiplayer' modes are also available. Three dozen flyable aircraft are featured, including all major models flown by the Japanese and U.S. forces. Planes can be customized in a workshop, to adjust set-ups and loadouts. The game offers both forgiving 'Arcade' and realistic 'Professional' control schemes, and four difficulty settings.

Have you ever dreamt of being a daring combat pilot, of roaring through the skies and obliterating enemies with a hail of hot lead? Have you ever sat down with a flight sim and had your fantasy crash to earth when you ran into a dizzying array of gauges, keyboard commands, and aviation lingo? Heroes of the Pacific might be the game for you. This World War II game ditches the complexities of real-world aviation in favor of non-stop cinematic action. There's one catch, though: where hardcore flight sims might frustrate some gamers with their complexity, this arcade-action game can frustrate with its difficulty and lack of saves.

You see that from the start of the game's campaign. You play as a young American pilot stationed at Pearl Harbor when the Japanese launch their infamous surprise attack and sink the Arizona with your brother on board. You have to scramble to beat back the hordes of Japanese planes. You have to protect this, destroy that, defend those, and generally fly around like a one-man air force, desperately trying to defeat vastly superior odds.

This mission serves as a template for things to come. As the campaign takes you across the Pacific over the course of WWII, you'll visit famed battle sites like Wake Island, Midway, Guadalcanal, and Iwo Jima. Each locale usually features multiple missions, each comprised of multiple primary and secondary objectives that come tumbling down on you like a pile of bricks. Just when you think you've got things under control, along comes another wave of planes. Then there might be a mini-sub to hunt down, a bunch of AA guns to obliterate, or destroyers to sink.

There's no time to breathe in Heroes of the Pacific, which is its main strength, but also becomes a problem at times. On the one hand, the action keeps you on the edge of your seat as dozens of planes fill the sky. Through the din and smoke of flak bursts, wounded planes sputter by you, and their defeated pilots parachute to the sea below. Engines roar, guns chatter, and radio traffic adds to the sense of urgency. In other words, Heroes of the Pacific makes you feel like a WWII hero right in the thick of things.

On the downside, the game tends to pile it all on too thickly. In one mission alone, you have to take down fifty planes -- more than the top US ace managed in the whole war. That sort of slaughter would be fine if the game didn't get so tough at times, even on the easier difficulty settings. In some missions, it can be a struggle to defeat the overwhelming odds, most of all when you need to escort allies beset by dozens of foes. If you can't knock out the antagonists with lighting speed, your allies die, and you lose the mission. Some of the boss battles with enemy aces are badly balanced, too. By the time they appear, your plane is often too damaged from previous encounters to stand a chance. 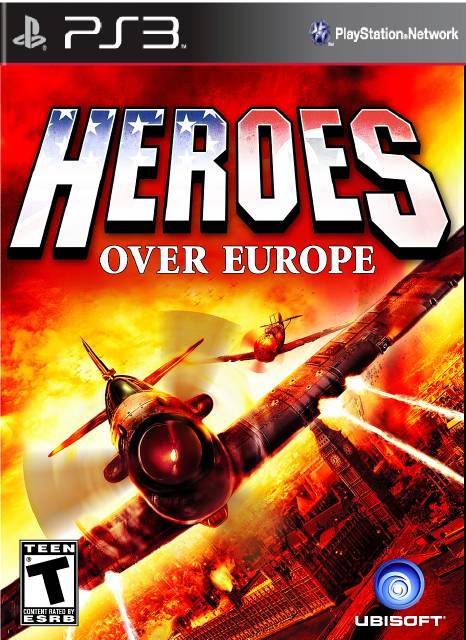 Worse still, Heroes of the Pacific commits the unforgivable sin of not letting you save during the long missions. You do get a few checkpoints within missions, but they're only valid during your current session. If you have to leave the mission, you'll need to restart the whole thing from scratch next time. Why not just kick the player in the teeth?

While the lack of saves and the difficulty can sap some fun out of Heroes of the Pacific, it does offer features that lighten your load. For one thing, you get unlimited ammo. The flight physics are very forgiving: it's hard to stall, and you can actually bounce off other planes. Anyone can learn how to fly the game's planes in a minute or two, so you can soar right into action. The game is playable with either a joystick or mouse/keyboard controls, though the former is preferable.

As you progress through the lengthy campaign, you'll unlock a handful of historical missions, though these feel just like the regular campaign missions. You'll also unlock battlegrounds and planes for a simple instant action mode, where you're beset by an ever-increasing number of enemy planes. Here you'll get to fly not merely US planes, but the Japanese ones you've encountered in the campaign. The overall plane roster of Heroes of the Pacific is impressive: thirty-six fighters and bombers and even some unexpected aircraft like the Catalina flying patrol boat.

Heroes of the Pacific offers no-frills multiplayer modes: deathmatch and team deathmatch, capture the flag (off a carrier), 'Fox & Hounds' (become the 'fox' and stay alive as long as possible while everyone chases you), and a mode where you try to sink an enemy carrier. There are very few servers out there at this point, and we encountered a number of dropped connections.

Heroes of the Pacific eschews the hardships and horrors of World War II in favor of a bright, sunny, comic book tone. It's all about gee-whiz derring-do and socking it to the bad guy. The game features menu and loading screens designed to look like WWII-era propaganda and movie posters, filled with dashing pilots flashing their pearly whites. The game's voiceovers are enjoyably cheesy, with amusingly over-the-top villains, adding to the feel of watching an old gung-ho B-movie. A rousing symphonic score adds to the mood.

The rest of the game's presentation is equally attractive. The engines and explosions sound weighty, and you'll hear neat details like a damaged battleship's klaxon wailing as you swoop over her. The tropical islands look lush and the planes nicely detailed. When planes explode, they erupt in clouds of fire and smoke, sending fiery plumes of debris tumbling down into the sea.

It's a real shame Heroes of the Pacific doesn't include a proper save system and better balancing. Richer multiplayer and instant action modes would be nice, too. Otherwise, this is an addictive air combat game that hits all the right notes: daring, adventure, and non-stop action.