Internet Explorer 5.2.3 Macintosh Edition is the Web browser that’s simple to use, hassle free, and totally built for your Macintosh.

This update of Internet Explorer 5.1 for Mac Preview Release provides:

Run IE on Mac OS X. There are still a few alternative ways to run Internet Explorer on Mac. But one thing is certain — in order to use Internet Explorer, you need access to a Windows system. You could access the Windows environment either locally on your Mac (by virtualization or dual-booting), or remotely (using Cloud Browsing solutions).

This update is for the English, Japanese, French, German, Italian, Spanish and Swedish versions.

One of the stated goals of the Internet Explorer 5 Macintosh Edition team was to deliver complete support for CSS-1 and HTML 4, which would be an historic achievement – and something The Web Standards Project and its thousands of members have been asking browser makers to do. That was certainly my main interest in participating in the Internet Explorer 5 beta program. I wanted to see these standards implemented, and help if I could.

The greatest improvement over Internet Explorer 5 – and any other browser I’ve used – is in the support for web standards. First of all, without standards, the web would break. People would be unable to access certain sites, developers would go nuts trying to implement workarounds, companies without deep pockets would be unable to participate because they could not afford all the workarounds and alternate versions required. So standards are key for all who use or build the web.

But Mac users have been especially disadvantaged in the past, when poor web authoring led to pages full of unreadable type – pages that were readable in Windows, but not on Macs and some other operating systems.

Internet Explorer 5 Macintosh Edition solves these problems by correctly implementing HTML 4 and Cascading Style Sheets Level 1, by removing cross-platform incompatibilities between font sizes, and by the significant innovation of Text Zooming, which puts the viewer totally in charge. With Internet Explorer 5, I can read any website, even if it was authored by someone who didn’t know what they were doing. And when the designer does know what s/he’s doing, the site displays exactly as it’s supposed to. (In fact, the designer can tell the browser exactly how to interpret the code – strictly or loosely, standards-conformant or backward-compatible.) 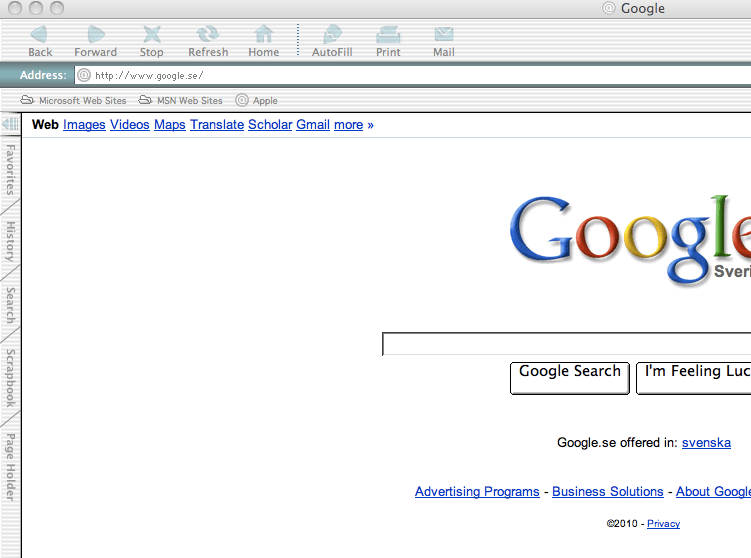 There’s a lot to like on the surface, and that’s what most people will notice. But my favorite features are under the hood: proper rendering of HTML and Style Sheets, the Text Zoom feature that lets me read any page comfortably no matter how it was coded, stuff that geeks and designers can appreciate – but that benefits anyone, regardless of their “expertise” in using the web. As a designer, I like that my sites come out the way I created them. As a user, I like that I’m in charge. (Even as a designer, I believe the person who uses the site is supposed to be in charge.)

I would suggest this browser to any Mac user. In fact, I’d recommend it to anybody, because I believe it is the most standards-conformant browser released by any company so far, on any computing platform. It’s a win for designers and a win for people who use the web. And that is a first.