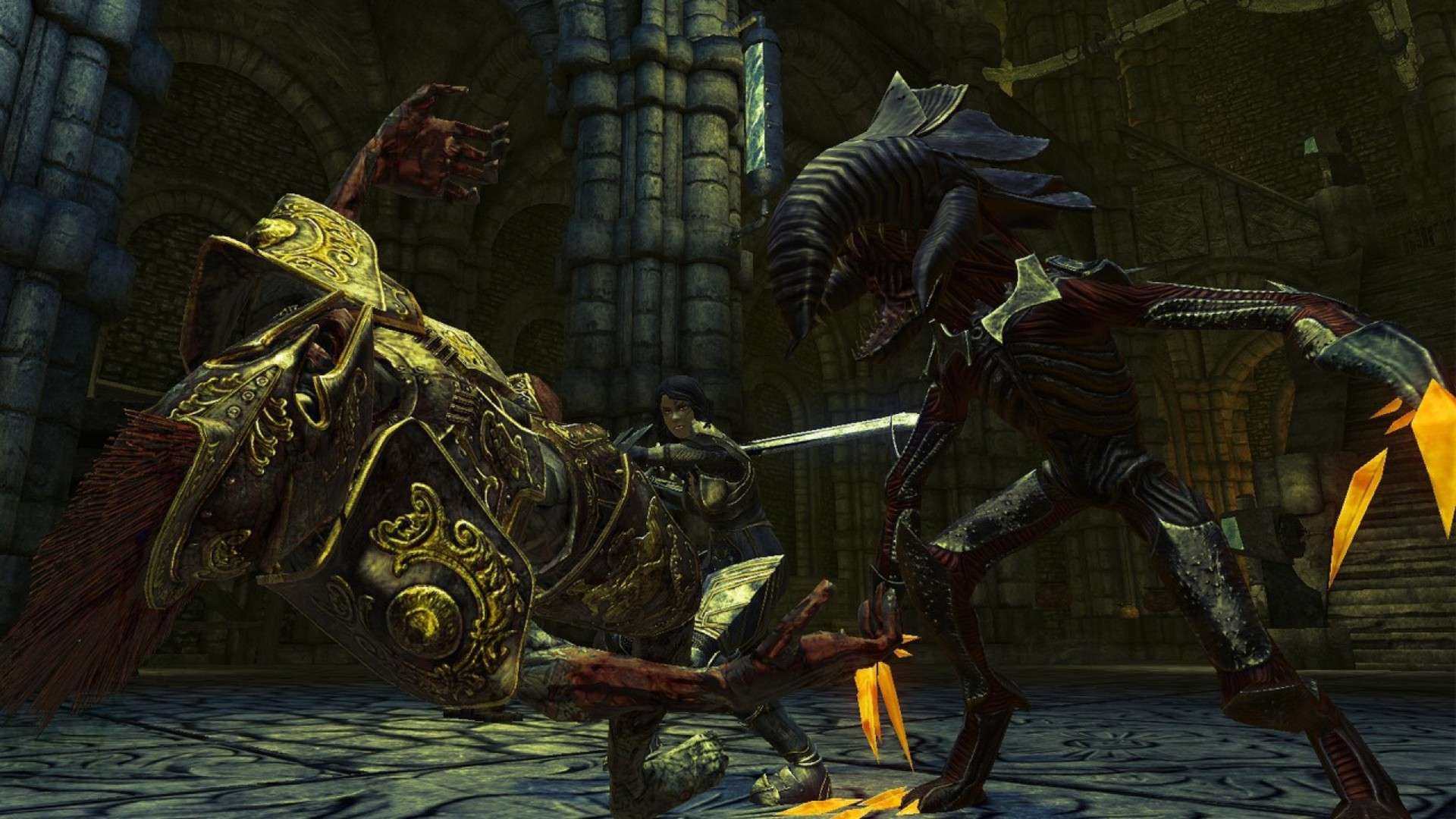 Comes with a special version (called 'Gift Edition') of the game, only in Russia.
The Time for Dragons is... Past
by Amanda L. Kondolojy

The repetitively named Divine Divinity was released as a PC-exclusive RPG eight years ago. Although the title was a minor hit, it didn't exactly make a huge impact on the RPG genre as a whole. Still, almost a decade later, Divinity is back, and instead of a story involving a civil war spanning the globe, Divinity II sets its sights on the skies and explores the mythology of dragons as well as those who would hunt them.

You play as a self-named hero or heroine, who has just finished training to become a dragon slayer. Unfortunately, before you become a proper dragon slayer, you have to go through a mind expanding ritual where you will gain special apparition-sensing and mind-reading abilities, thanks to a Dragon-infused concoction. However, this ritual comes with one side effect... you forget all your training (total burn!) But nevermind your lack of skills, there are dragons running loose out there, and it's your job to stop them. That is until you find yourself turning into a dragon yourself, due to some negligence on the part of those who are supposed to be looking out for you.

The story is certainly conducive to the RPG format and allows for plenty of character growth. However, I couldn't help but feel like it was a little bit hollow. Once the 'twist' happens at the beginning, you are left with a whole lot of dialogue reiterating things you know already. Throw in some stock characters and classic fantasy tropes, and you've got a story that you probably know all about before even inserting the disc.

The formulaic story is certainly disappointing, but it is far from the worst facet of this game. That honor belongs to the visuals. Not since The Last Remnant have I seen an RPG that gets the technicalities as wrong as Divinity II. Right from the opening cutscene, you'll notice plenty of framerate inconsistencies, chugging, and awkward animation. And that's just the beginning. Screen-tears and pop-in are constant throughout the game as well, and the poor visuals really detract from the overall experience of the game. Though there were no game-breaking glitches (at least that I encountered), the chugging and framerate issues can hinder you in battle, which can lead to some serious frustration.

In addition to the visuals, I was also disappointed by the game's level-up and progression system. Current-generation RPGs like Dragon Age: Origins and Fable II have done a great job of sprucing up the old RPG formula with targeted leveling and diverse abilities, but Divinity II takes the exact opposite approach. Instead of branching abilities and levels, Divinity II has very linear leveling with an exclusive three-class system that locks you into one class with a specific leveling path. Although you can switch your classes, doing so is very cumbersome, and the game doesn't afford you many luxuries if you decide to switch mid-game from archer to warrior.

The battle system itself is not too terrible. You'll start out with a standard and special attack, each activated by pressing the face button correlated with the attack. The battle system is active, meaning you'll have to engage in a bit of button-mashing during battles. However, the catch is that unless you are using standard melee, there is a time limit for each attack. So, if for instance you have a charged sword attack equipped, you'll have to wait 3-4 seconds in between uses. Although the game tries to use this to help you develop a tactical strategy that doesn't include mashing buttons. However, the trouble is that this system actually makes the combat feel really slow, and you'll have to do a lot of jumping to avoid enemy attacks while you are waiting to use an attack that is not melee.