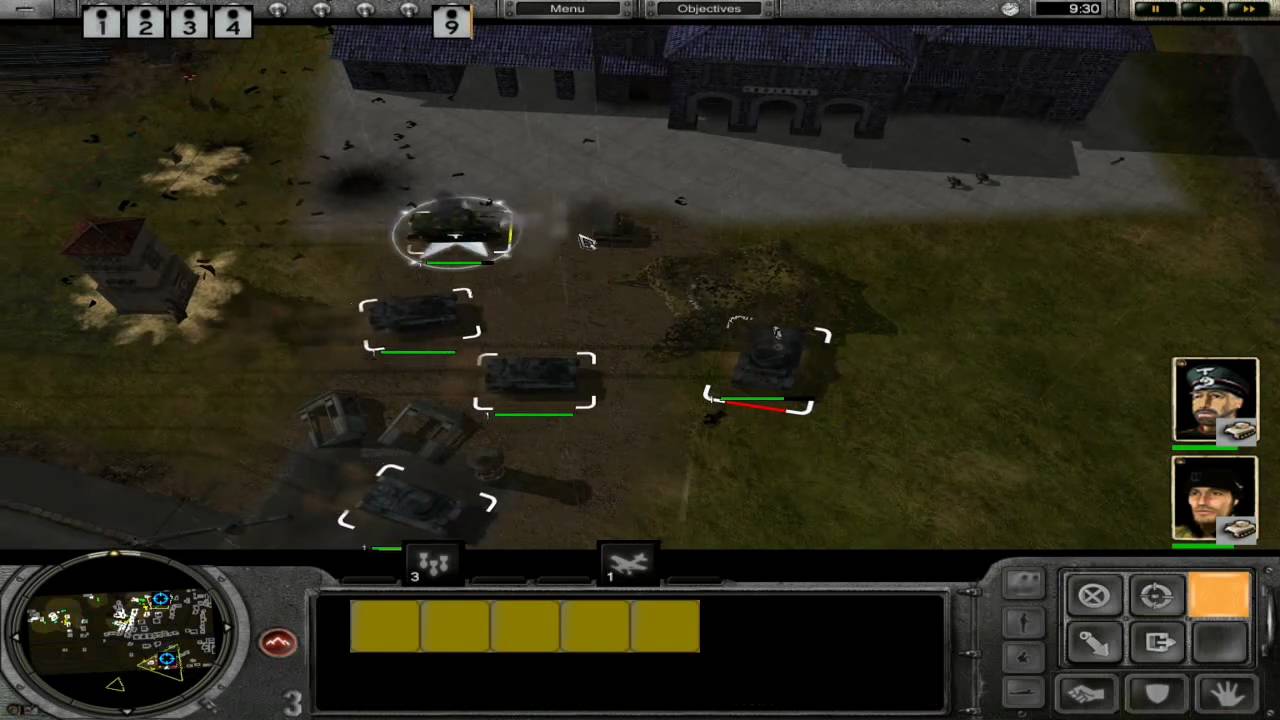 Ever since the Close Combat series, which was originally developed as a computer version of Avalon Hill's Squad Leader, wargamers have been seeking the next big World War II strategy epic. Many titles had the early promise of being that next game -- one that was easy to master, offered re-playability and reasonable realism. But like the German Army and their invasion of the Soviet Union, the promise of sure victory was short-lived, and many of those titles now lay in bargain bins like some destroyed tank. Codename Panzers: Phase One, which developer Stormregion has created as the first of three titles, is more than a worthy successor to the Close Combat crown. 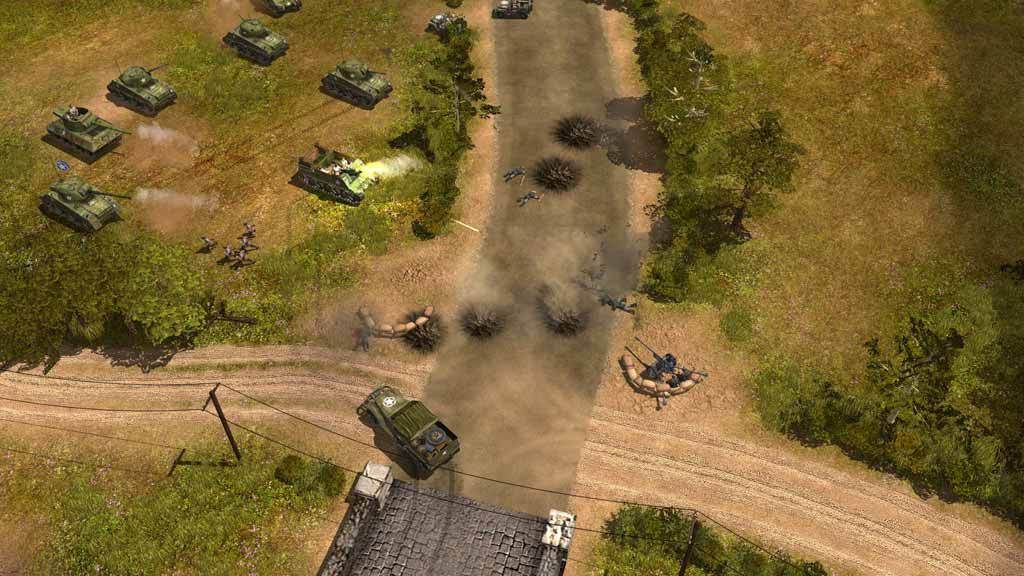 For the hardcore war buff, the game is both extremely balanced yet realistic in terms of individual unit strength. Nor is this the typical rock-paper-scissors RTS where tanks are tanks and the rush wins the day. In Codename Panzers, early war Panzer II tanks won't stand up against T-34s in a head-to-head showdown, nor are you advised to try your luck with a Sherman against a Tiger. Yet, on the flip side, the game's liberal use of repair units for your damaged vehicles adds just enough of the arcade-styled flair to make sure that you aren't relegated to continuously repeating missions just because your armor ran into some tough opposition early on. Likewise, the developers have kept this from being a 'tank rush' game by limiting the amount of armor that can be poured into individual maps.

Codenames Panzers further breaks from the usual pack of strategy games in that it actually manages to innovate rather than imitate. The results offer some interesting turns, and surprisingly most of the decisions actually work quite well. You can easily scroll in and see the action up close, rotate the map to get a better view of the action at ease, and even can expect your armor to knock over trees. Buildings and bunkers can be destroyed by artillery and aerial bombardment, but also occupied and used as defensive positions. And rather than fall back on the tired Command & Conquer approach of merely placing units inside, you can actually see individual rooms in each building. This adds an entire level of fighting in the game's various city and town-based maps as you have to clean out buildings room by room.

The game isn't limited to towns or tight streets, and offers a variety of locations in the European theater of war with 30 missions through 30 campaigns that let you fight it out as the Germans, Soviets, and American/British forces. There are more than 50 controllable vehicles, all accurately represented. Unlike other real-time tactical games, such as Blitzkrieg or Sudden Strike, Panzers offers an unprecedented level of detail. While zoomed out, you can still make out individual units at a glance, but zoomed in you can almost see the whites of their eyes.

The interface is especially straightforward and the game is simple to play yet provides a breath of order and commands for your units. The diverse campaigns offer a bit of replayability, as there are three difficulty settings. Additionally, the multiplayer mode makes for quite a very balanced war game, and it's among the best since Close Combat. The only thing that seems missing is a random map generator for those times when you want some blitzkrieg action without having to play a mission from a campaign.

Panzers is a little rough around the edges in other ways: the sound has a few bugs that were probably avoidable, while the recorded dialog is forgettable at best and rather amusing at worst. And, like so many WWII simulations, Panzers also glosses over the conflict as a whole and is so generalized that you only get a flavor of some key engagements. Still, there's enough here that we'll be looking forward to finding out what will be covered in Phase Two.

The second of a planned three-part series, CDV's Codename: Panzers -- Phase Two returns players to the battlefields of World War II to command aircraft, artillery, and mechanized infantry in real-time strategy combat. Again, players can choose to lead one of three military alliances; this time the Anglo-American Allies, German-Italian Axis, and the Yugoslavian resistance are available. New units, environments, and single-player campaigns are included, as well as a mission editor that lets players create their own challenges. The main game's storyline and dialog were scripted by Hollywood veterans David Freeman and Joe Reinkemeyer (Law & Order, Buffy the Vampire Slayer), and voice acting for the main character, American Jeffrey S. Wilson, was done by accomplished screen actor Peter Weller (RoboCop, Naked Lunch).

Despite the recent 70th anniversary celebrations of VJ Day, it can sometimes be hard to tell in the PC gaming industry that World War II has actually ended; the continual flood of titles means not only do the memories never fade, but the guns never stop firing. However, just because there are so many, it doesn't mean there aren't some great titles among them. Codename: Panzers Phase One was one of them, and this semi-sequel is another.

Semi-sequel is probably the more accurate way to describe Storm Region's game - as this recent news post shows, the company has a proper sequel under way. The best way to think of Codename: Panzers is like the Quentin Tarantino movie Kill Bill; the game is ultimately one, but split into parts to give us a more refined experience, and to allow extra development time on the second part (in this case Phase Two). So the game's style of play and engine are ultimately the same, but that doesn't mean they are completely alike. For a start, Phase One was set in Europe, while Phase Two shifts the action to Africa, which in itself has an impact on gameplay.

There have also been some improvements. Firstly, the AI has been rewritten for the multiplayer and skirmish elements, and enhanced for the single player campaign. This is complemented by a new multiplayer option called 'mission mode' where human-controlled teams have to complete objectives rather than destroying each other, although this is unfortunately not a full co-op mode. The day-to-night cycles (and vice-versa) have also seen improvement. If you're playing in the day, the transition to night has a significant impact on gameplay; the fog of war is greater, the sound of enemies you can't see is more important, and headlights - which are the focus of the adjustment - are a vital strategy element. The game now allows you to extend your field of view by turning on the headlights of your vehicles. However, this also results in you being more visible to the enemy, and thus the risk is up to you. New units are also present in Phase Two, adding to the selection already on offer which have received a tweak thanks to feedback from fans. Also added to Phase Two is an editor, allowing you to create your own campaigns complete with cut-scenes (which use the in-game engine).

The game's Gepard engine has also seen an update. Cut-scenes are smoother, and lip syncing is present, but overall nothing fundamental has changed. Players of Phase One will instantly recognize the game, albeit with the complete change of scenery which is slightly more yellow now... Still, that's not necessary a bad thing; the game already sported a very competent 3D engine that makes a welcome return. The troops and vehicles are well animated (especially the way the tanks rock back and forth when firing), but it is the environment which looks particularly impressive. Aside from being packed with detail, and a providing a good sense of reality (thanks to birds, camels, and a lot of sand), the environment is also rather destructive, and you'll be impressed the first time you see your tanks tearing through trees instead of having to find a long route around them.

If you didn't know about the series previously, then you probably don't realize that Codename: Panzers Phase Two is a resource-free real-time strategy title, focusing on the action that makes the game so much fun. This is hard for those who are used to building bases and stocking up armies, but is a concept which has already gone from 'innovative idea' to 'used-by-everyone' in the World War II-RTS sub-genre. This is probably a problem overall with Codename: Panzers Phase Two. Even forgetting Phase One, it's hard to say that the game is truly innovative; the concepts and ideas have been used in plenty of RTS titles in recent years, and ultimately it doesn't offer an experience that feels unique. On the other hand, it is closer to the definitive experience than most other WW2 RTS titles. While it may have little new to offer, it is providing tried-and-tested concepts in a game that is refined and highly enjoyable. It's a game that will get you hooked, even without some impressive design advancement.

As expected for a WW2 title, you are able to take control of either the Allied or Axis forces across a range of Africa-based missions. They are grounded in history, but are varied and on the whole, enjoyable. When completing these a range of Partisan missions are available, with the emphasis on using the technology 'acquired' from either side. One thing it does do differently from some RTS titles (though not its predecessor) is allow you to customize your army between missions. As before you are given a number of points, and are able to choose which infantry, tanks, and other artillery you want to control, choosing units from more than one nation (for example, Russian tanks when playing as the Allies). Although this freedom is useful, it can be frustrating; sometimes your choices can actually make progress very difficult because some essential unit was not purchased for a mission you didn't know about at the time.

On top of the missions there's the usual skirmish mode - which also allows you to build your own armies - with online and LAN play available with three different game types (Team Match, Domination, and a Multiplayer Mission). There are also two editors on offer: the general Level Editor, and the In-Game Animation Editor. The two can be used in combination to create your own missions, with the range of options in the former combining with the film-making ability of the later. They are great inclusions, but are likely to pass the average player, particularly the more complicated Animation Editor. The Level Editor, however, will allow novices to produce some interesting multiplayer maps, but a lot of time needs to be dedicated to achieve worthwhile single-player levels. We hope this inclusion by Stormregion will see the community produce some great new content which will keep you going until Phase Three.